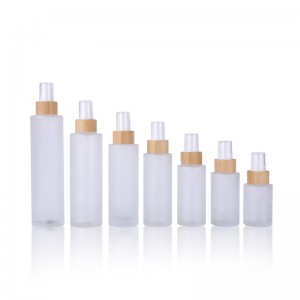 Frosting is, for example, a process in which a cosmetic glass bottle becomes smooth and becomes matte. The light irradiates the surface to form diffuse reflection. In chemical frosting, glass is mechanically ground or manually ground with emery, silica sand, pomegranate powder and other abrasives to form a uniformly rough surface, or glass and other objects can be treated with a hydrofluoric acid solution to form frosted glass.

Both frosting and sandblasting are used to cover the glass surface, so that the light will diffuse relatively evenly after passing through the lampshade. It is difficult for ordinary users to distinguish between these two technologies. The following describes the manufacturing methods of these two technologies and how to identify them.

Frosting refers to immersing the glass in a prepared acid liquid (or applying an acid paste), corroding the glass surface with strong acid, and the hydrogen fluoride ammonia in the strong acid solution causes the glass surface to form crystals. Therefore, if the frosting process is done well, the surface of the frosted glass is very smooth, and the scattered crystals produce a hazy effect. If the surface is relatively rough, this indicates that the acid is severely eroding the glass, or some of them still have no crystals. The characteristic of this process is the appearance of shiny crystals on the glass surface formed under critical conditions. The main reason is that the hydrogen fluoride ammonia has almost been consumed. In order to achieve this state, many manufacturers have made many attempts and studies, but have not been able to overcome this difficulty.

It uses the sand particles ejected by the spray gun at high speed to hit the glass surface to form a fine uneven surface, thereby achieving the effect of scattering light, and forming a hazy feeling when light passes through. The surface of the glass products produced by the sandblasting process is rough. Because the surface of the glass is damaged, it looks like white glass in terms of the photosensitivity of the original transparent glass.

The two processes are completely different. Frosted glass is more expensive than sandblasted glass, and the effect mainly depends on the needs of users. Some unique glasses are not suitable for frosting. Judging from the noble pursuit, matte should be chosen. The sandblasting process can be done in general factories, but the sandblasting process is not easy to do well.

Shanghai Rainbow Industrial Co.,Ltd, For inquiries about our products or pricelist, please leave your email to us and we will be in touch within 24 hours.